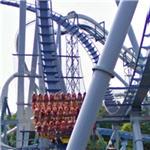 By kjfitz @ 2010-01-22 13:08:27
@ 37.234409, -76.648214
Williamsburg, Virginia (VA), US
Griffon is a roller coaster, announced on August 23, 2006, at Busch Gardens Williamsburg, located in Williamsburg, Virginia. The coaster, a Bolliger & Mabillard diving machine, now reigns as tallest and fastest dive machine coaster, surpassing its sister, SheiKra, at Busch Gardens Tampa Bay in Tampa, Florida. Griffon originally had two other potential names — "IronEagle" and "Voltare" — before Busch Gardens decided on the name "Griffon". Griffon has notably replaced The LeMans Raceway, one of the park's original rides. Griffon is the fourth diving machine coaster ever created worldwide, and the second ever constructed in the United States.

Griffon is themed after a griffin, the half-lion/half-eagle mythological creature, and not a griffon, which is a breed of dog. It is believed that the spelling used is the French version of the word. The ride features several new shops located in a new inlet area located behind the former Left Bank Portrait shop (now Griffon Gifts), near the Grande Gourmet ice cream and dessert shop. The ride maneuvers through this new section, including a water splash zone near the new "Bistro 205," a new all-you-can-eat buffet, and a first drop that dives under a bridge that is built up over the existing ground level.
Links: en.wikipedia.org
1,142 views