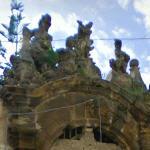 By kjfitz @ 2011-12-20 19:42:37
@ 38.080175, 13.511858
Bagheria, Italy (IT)
The Villa Palagonia is a patrician villa in Bagheria, 15 km from Palermo, in Sicily, southern Italy. The villa itself, built from 1715 by the architect Tommaso Napoli with the help of Agatino Daidone, is one of the earliest examples of Sicilian Baroque. However, its popularity comes mainly from the statues of monsters with human faces that decorate its garden and its wall, and earned it the nickname of "The Villa of Monsters" (Villa dei Mostri ).

This series of grotesques, created from 1749 by Francesco Ferdinando II Gravina, Prince of Palagonia, aroused the curiosity of the travellers of the Grand Tour during the 18th and 19th centuries, for instance Henry Swinburne, Patrick Brydone, John Soane, Goethe, the Count de Borde, the artist Jean-Pierre Houël or Alexandre Dumas, prior to fascinate surrealists like André Breton or contemporary authors such as Giovanni Macchia and Dominique Fernandez, or the painter Renato Guttuso.
Links: en.wikipedia.org
346 views