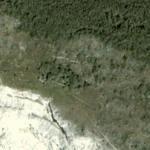 Born of the noble family of the Gozzolini at Osimo, Marche, he was sent to study jurisprudence at Bologna and Padua, but, feeling within himself a call to the ecclesiastical state, abandoned the study of law for that of theology and Holy Scripture, giving long hours daily to prayer. On his return home we are told that his father, angered at his change of purpose, refused to speak to him for ten years. Sylvester then accepted a canonry at Osimo and devoted himself to pastoral work with such zeal as to arouse the hostility of his bishop, whom he had respectfully rebuked for the scandals caused by the prelate's irregular life.

The saint was threatened with the loss of his canonry, but decided to leave the world on seeing the decaying corpse of one who had formerly been noted for great beauty. In 1227 he retired to a desert place about thirty miles from Osimo and lived there in the utmost poverty until he was recognized by the owner of the land, a certain nobleman named Conrad, who offered him a better site for his hermitage. From this spot he was driven by damp and next established himself at Grotta Fucile, where he eventually built a monastery of his order.