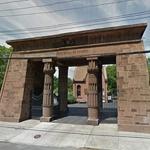 By Fab @ 2013-09-15 02:30:29
@ 41.312375, -72.927098
New Haven, Connecticut (CT), US
Grove Street Cemetery or Grove Street Burial Ground in New Haven, Connecticut is located adjacent to the Yale University campus. It was organized in 1796 as the New Haven Burying Ground and incorporated in October 1797 to replace the crowded burial ground on the New Haven Green. The first private, nonprofit cemetery in the world, it was one of the earliest burial grounds to have a planned layout, with plots permanently owned by individual families, a structured arrangement of ornamental plantings, and paved and named streets and avenues.

The Grove Street Cemetery was further designated a National Historic Landmark by the United States Secretary of the Interior in 2000.
Links: en.wikipedia.org
612 views