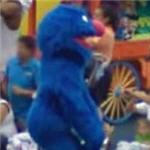 Grover was first seen on The Ed Sullivan Show in a Christmas Eve appearance in 1967. He appeared as Gleep, a monster in Santa's workshop. He later made a cameo appearance in The Muppets On Puppets in 1968 with the Rock and Roll Monster. In 1969, clad in a necktie, he appeared in the Sesame Street Pitch Reel in the board room sequences. During the first season of Sesame Street, Grover was originally named Fuzzyface by fans depicted as having dark green fur and an orange nose. By the second season of Sesame Street, this was changed to the more familiar puppet with blue fur and a pink nose (although the original puppet was used for the initial appearance of Grover's mother). Grover's birthday is October 14.
Links: en.wikipedia.org
768 views