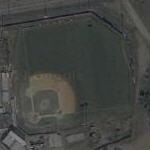 By kjfitz @ 2010-03-07 20:17:14
@ 64.840966, -147.75856
Fairbanks, Alaska (AK), US
Growden Memorial Park is an outdoor baseball park in Fairbanks, Alaska, United States. It is used for summer collegiate and high school baseball, and has been the home field for the Alaska Baseball League's Alaska Goldpanners since 1960. It's also home to the Athletes in Action Fire. It was also home to the defunct North Pole Nicks, before the Nicks relocated to Newby Field. Famous players who played there include: Tom Seaver, Dave Winfield, Rick Monday, Terry Francona, Bob Boone, Bret Boone, Jason Giambi and numerous others.

It also has played host to the Alaska School Activities Association state baseball championships over the last few years.

It has an artificial turf infield and a natural grass outfield. It contains several dozen box seats salvaged from Seattle's Sick's Stadium. The Carlson Center is located nearby.

The ballpark holds 3,500 people and has the distinction as the northern-most baseball park in the world and the unique summer Midnight Sun Game.
Links: en.wikipedia.org
769 views