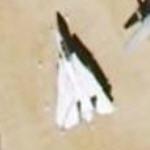 By kjfitz @ 2007-03-15 22:13:16
@ 33.883572, -117.266441
Riverside, California (CA), US
The F-14 came about from the cancellation of the Navy’s interest in the F-lll program. Grumman designed the aircraft to replace the venerable F-4 Phantom on US Navy aircraft carriers. The Navy was looking for a carrier based all weather air superiority fighter and what it got was one of the fastest, most agile, and most capable aircraft in our inventory. The aircraft is made from over 24% titanium. The variable sweep wings are computer controlled and automatically adjust to the most effective position. At full forward sweep this large and heavy aircraft can take off in less than 1000 feet. The F-14 weapon systems can track up to 24 targets 100 miles away. The system can attack six targets simultaneously with the long range Phoenix missiles. The F-14 was made famous in the movie “Top Gun” and in the Mediterranean where it tangled with (and shot down) two Libyan fighters. The F-14 is the Navy’s standard carrier based fighter with two squadrons serving aboard each carrier. The F-14B and D versions with upgraded engines and avionics will serve the Navy well into the future. There were 80 F-14A’s built and delivered to Iran but without technical assistance from the United States, the aircraft are merely expensive display items. For more about the aircraft, see the F-14 Tomcat Association website.

The aircraft at the March Field Museum is a preproduction A model, serial number BUNO 157990, and it is on loan from the U.S. Navy. It was number 11 of 12 test aircraft built. One of the many important tasks that #11 participated in was on the USS Independence , testing it’s suitability for carrier use. It was transferred from General Dynamics - Pomona, along with the ground support equipment seen inside the museum, where it was used to mount missiles for test evaluation. It was towed on its landing gear in the middle of the night along Highway 60 from Pomona to March Field in September of 1992.
Links: marchairmuseum.com
664 views