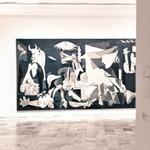 By Dania @ 2013-01-10 16:20:12
@ 40.407731, -3.694194
Madrid, Spain (ES)
Guernica is a painting by Pablo Picasso. It was created in response to the bombing of Guernica, a Basque Country village in northern Spain by German and Italian warplanes at the behest of the Spanish Nationalist forces, on 26 April 1937, during the Spanish Civil War. The Spanish Republican government commissioned Picasso to create a large mural for the Spanish display at the Paris International Exposition at the 1937 World's Fair in Paris.


Guernica shows the tragedies of war and the suffering it inflicts upon individuals, particularly innocent civilians. This work has gained a monumental status, becoming a perpetual reminder of the tragedies of war, an anti-war symbol, and an embodiment of peace. On completion Guernica was displayed around the world in a brief tour, becoming famous and widely acclaimed. This tour helped bring the Spanish Civil War to the world's attention.
Links: en.wikipedia.org
966 views