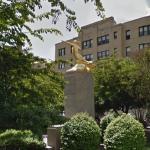 On December 17, 1902, a transmission from the Marconi station in Glace Bay, Nova Scotia, Canada, became the world's first radio message to cross the Atlantic from North America.