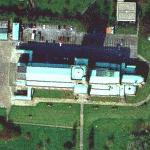 By Hinkkanen @ 2006-05-07 06:29:04
@ 51.241141, -0.591159
Guildford, United Kingdom (GB)
Guildford Cathedral claims to be the only cathedral to be built on a new site in the southern Province of England since the Reformation. Guildford was made a diocese in its own right in 1927, and work on its new cathedral, designed by Sir Edward Maufe, began nine years later. It was interrupted by the Second World War, and the building wasn't consecrated until 1961 and completed until 1964. The classic horror film The Omen was filmed there, with the golden wind-vane on top of the cathedral being added specifically for the film. The members of the church liked it so much they requested that it be made a permanent feature.
Links: en.wikipedia.org
1,177 views