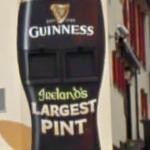 By GlobalPlayer @ 2010-04-12 12:37:51
@ 54.991295, -7.324053
Derry, United Kingdom (GB)
Guinness is a popular Irish dry stout that originated in the brewery of Arthur Guinness (1725–1803) at St. James's Gate, Dublin. Guinness is based on the porter style that originated in London in the early 18th century and is one of the most successful beer brands worldwide. A distinctive feature is the burnt flavour which is derived from the use of roasted barley. For many years a portion of the drink was aged to give a sharp lactic flavour, although Guinness has refused to confirm whether this still occurs. The thick creamy head is the result of the beer being mixed with nitrogen when being poured. It is popular with Irish people both in Ireland and abroad and, in spite of a decline in consumption over recent years, is the best-selling alcoholic drink of all time in Ireland where Guinness & Co. makes almost €2 billion annually.
Links: en.wikipedia.org
516 views