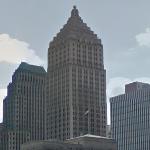 By kkeps @ 2012-11-20 13:08:00
@ 40.444241, -79.991168
Pittsburgh, Pennsylvania (PA), US
Gulf Tower is one of the major distinctive and recognizable features of downtown Pittsburgh, Pennsylvania. The tower is named for the Gulf Oil Corporation, which was one of the leading multinational oil companies of its time, consistently ranking among the largest 10 corporations in the country. In 1984, Gulf and Chevron took part in the world's largest merger ($13.3 billion or $29.8 billion today) to that time.

Built as the headquarters for the Gulf Oil Company, and known as the Gulf Building, the structure was designed by the firm of Trowbridge & Livingston and completed in 1932 at a cost of $10.05 million ($139.8 million today). Now called Gulf Tower, it has 44 floors and rises 177.4 m (582 ft) above Downtown Pittsburgh. The crown of the skyscraper is modeled after the Mausoleum of Halicarnassus in the style of a step pyramid. The building was listed as a Pittsburgh History & Landmarks Foundation Historic Landmark in 1973.

On June 13, 1974, a bomb was detonated on the 29th floor of the Gulf Tower. The Weather Underground Organization took credit for the attack claiming it was in protest to Gulf Oil's involvement in the oil rich regions affected by the Angolan War of Independence.
Links: en.wikipedia.org
759 views