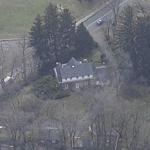 It shows the convergence of Dutch and English building traditions in the later years of the colonial Hudson Valley. In 2005 it was listed on the National Register of Historic Places.
Links: en.wikipedia.org
685 views