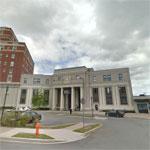 The 80 year-old Halifax Railway Station continues the 150-year history of passenger rail service to the city and is the eastern terminus of North America's passenger rail network.

The new, and present, station opened in 1928 at the south end of Hollis Street, opposite Cornwallis Park. The structure is constructed of white limestone and has a colonnaded entry off Hollis Street. Inside, the Ticket Lobby has a high arched ceiling with a seated waiting area and ticketing/baggage counters. At the time of its construction, the station had a massive covered train shed which extended for 1,500 feet south over the station tracks to protect passengers boarding and disembarking from the weather. The earlier 1920 "temporary" station was converted to an attached baggage and express shed.
Links: en.wikipedia.org
692 views