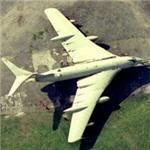 Victor K.2s made a substantial contribution in the Falklands War, flying over 3,000 hours and making over 600 air refuelling sorties from Ascension Island, in support of the Vulcans, Nimrods, Hercules and Harriers. They also flew in the Gulf War, refuelling the Tornado and other allied aircraft. The Victor's outstanding versatility and advanced design enabled it to have the longest service of all the 'V-bomber' generation.

XL231 joined 139 Squadron on 1 February 1962, returning to Handley-Page for conversion to a B(S.R) Mk 2 in November 1963 and joining the Wittering Wing in July 1964. It was converted to become the prototype K.2 Tanker on 23 January 1972 and saw service in the Falklands War, in support of the 'Operation Black Buck' Vulcan raid on Port Stanley, and later in the Gulf War. It was flown into retirement at Elvington in November 1993. The aircraft is kept in ground operational condition by Andre Tempest and his ground crew.
Links: yorkshireairmuseum.org
1,276 views