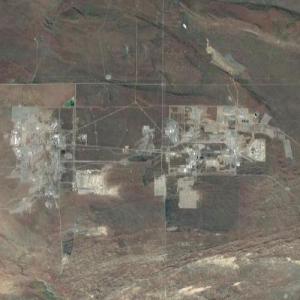 By kjfitz @ 2005-08-03 13:45:28
@ 46.55354823, -119.55648435
Richland, Washington (WA), US
Hanford is one of five major Department of Energy nuclear processing plants and R&D laboratories in the United States. It has more than ten industrialized areas (most with reactors of some kind) located on a 562 square mile site on the Columbia River in eastern Washington. Originally built in secret to produce plutonium for the Manhattan Project, the installation manufactured nuclear materials used in bombs for decades after the war, and it has become one of the most contaminated sites in the country, with millions of gallons of radioactive waste, much of it migrating through the soil towards the Columbia River. More than 10,000 people work on clean-up issues at the reservation, most of which continues to be closed to the public.
Links: clui.org, en.wikipedia.org
10,116 views

jbottero
@ 2012-01-25 16:55:21
This area is "200 West" and "200 East". The main function of the facilities in the 200 Area of Hanford was to remove the plutonium from the uranium fuel rods after they had been subjected to the nuclear chain reaction in the 100 Area reactors. Five massive processing facilities called “canyons” were where these activities took place. They were called canyons because each of them is about three football fields long, with walls extending sixty feet above the ground and dropping another forty feet below it.