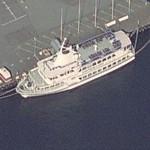 It sailed from Sønderborg to Gelting in Germany every day as a so called Spritbåd (Spirit boat) or "Æ Spritter" as locals called them.

It all ended around 1990 when the European Union (EU) told danish and german authorities to stop this sort of tourisme because it was against EU regulations. So the danish Economy Minister stopped them. She became VERY unpopular for that.

It was a very popular route for people all ages to have a good time together and eat and drink or playing cards.

People also bought a lot of liquor, tobacco, sweets, perfume (tax free of course ;-) ). Germans did also use the boats a lot, but they mostly bought butter, because it was cheaper than in Germany, they called the boats Butterschiffe (Butter ships).

2005 it was sold to shipowner Ab Sundscharter, Helsingborg, and renamed to HARMONY AF HELSINGBORG and has sailed here from then on.
Links: www.faktaomfartyg.se
691 views

It is a former german boat See link above.

3 weeks ago I sailed with Siluna Ace on, a lunch cruise. Very good.
We where 5 people, from Ships & Ferry Forum.