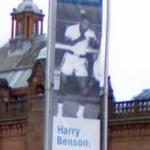 Benson was assigned to travel with The Beatles on their first American tour in 1964. One of his most recognisable images shows the band in a gleeful pillow fight in a hotel room.
Links: en.wikipedia.org
445 views