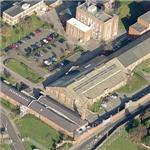 A towing tank: This is a basin, several metres wide and hundreds of metres long, equipped with a towing carriage that runs on two rails on either side. The towing carriage can either tow the model or follow the self-propelled model, and is equipped with computers and devices to register or control, respectively, variables such as speed, propeller thrust and torque, rudder angle etc. The towing tank serves for resistance and propulsion tests with towed and self-propelled ship models to determine how much power the engine will have to provide to achieve the speed laid down in the contract between shipyard and ship owner. The towing tank also serves to determine the manoeuvring behaviour in model scale. For this, the self-propelled model is exposed to a series of zig-zag manoeuvres at different rudder angle amplitudes. Post-processing of the test data by means of system identification results in a numerical model to simulate any other manoeuvre like Dieudonné spiral test or turning circles. Additionally, a towing tank can be equipped with a PMM (planar motion mechanism) or a CPMC (computerized planar motion carriage) to measure the hydrodynamic forces and moments on ships or submerged objects under the influence of oblique inflow and enforced motions. The towing tank can also be equipped with a wave generator to carry out seakeeping tests, either by simulating natural (irregular) waves or by exposing the model to a wave packet that yields a set of statistics known as response amplitude operators (acronym RAO), that determine the ship's likely real-life sea-going behaviour when operating in seas with varying wave amplitudes and frequencies (these parameters being known as sea states). Modern seakeeping test facilities can determine these RAO statistics, with the aid of appropriate computer hardware and software, in a single test.
Links: en.wikipedia.org
1,268 views