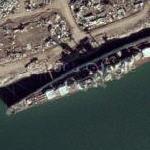 After decommissioning in 1961 she was mothballed in the South Boston Naval Annex and eventually laid up in the Naval Inactive Ship Maintenance Facility at Philadelphia, where she remained until 2006. After an attempt to turn her into a museum ship in Milwaukee, Wisconsin, failed, she was towed to Brownsville, Texas, for scrapping, and arrived there 7 September. By July 2007, she had been completely broken up.
Links: en.wikipedia.org
1,465 views