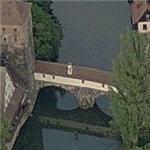 The executioner had to live in segregated accommodation within the city, since his trade was considered "dishonest". Up until the Age of Enlightenment, citizens avoided any physical contact with the hangman, in order not to be excluded from the Christian community.
Links: www.nuernberg.de
1,265 views