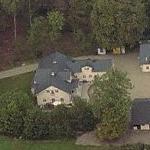 By alfjon @ 2007-12-06 14:19:45
@ 56.075728, 12.704151
Helsingborg, Sweden (SE)
Henrik Edward Larsson MBE [IPA: 'hɛnrɪk 'lɑːʂɔn] (born September 20, 1971 in Helsingborg, Skåne) is a Swedish footballer. Larsson is best known for helping win four titles in seven years for Scottish club Celtic. He subsequently had a two-year spell at Barcelona of Spain, where he won two titles and the Champions League. In the summer of 2006 he retired from international football and returned to his home town club of Helsingborgs IF. He later joined Manchester United on a brief loan spell between January and March 2007.

In the 1990s, Larsson was famous for his unique high-flying, blonde dreadlocks. However, in 2000 not long after recovering from a career-threatening leg injury, Larsson had his head completely shaven. He has not let his hair grow back since. In spite of this time out of the game, Larsson amassed 93 caps for Sweden, scoring 36 goals. He has now retired from international football.
Links: en.wikipedia.org
2,821 views