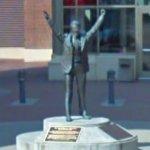 Brooks began his coaching career at his alma mater, the University of Minnesota, where he worked from 1970-79. His success in the Olympics earned him a head coaching job in the NHL with the New York Rangers. He would also coach the Minnesota North Stars, New Jersey Devils, and Pittsburgh Penguins.

In 2003, shortly after the movie "Miracle" finished filming, Brooks died in a single vehicle accident in which he apparently fell asleep at the wheel. He was elected to the Hockey Hall of Fame in 2006.
Links: en.wikipedia.org
1,209 views