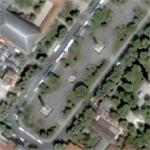 By neotrix @ 2011-09-11 11:49:18
@ 41.00607435, 28.97579216
Istanbul, Turkey (TR)
The Hippodrome of Constantinople was a circus that was the sporting and social centre of Constantinople, capital of the Byzantine Empire. Today it is a square named Sultanahmet Meydanı (Sultan Ahmet Square) in the Turkish city of Istanbul, with only a few fragments of the original structure surviving. It is sometimes also called Atmeydanı (Horse Square) in Turkish.

The word hippodrome comes from the Greek hippos, horse, and dromos (δρομος), path or way. Horse racing and chariot racing were popular pastimes in the ancient world and hippodromes were common features of Greek cities in the Hellenistic, Roman and Byzantine eras.
Links: en.wikipedia.org
880 views