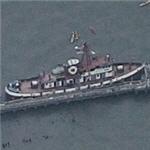 In 1959 this Company was redesignated Marine Co. 2. The station closed in 1991 but Harvey continued in regular service a few more years.

In 1992, the Fire Department reconsidered the need for a North River fireboat and reopened the Pier 53 station.

It is most appropriate that Harvey is now berthed at Pier 63 Maritime, a stone's throw from where she performed most of her lifetime of service, 64 years.
Links: www.fireboat.org
810 views