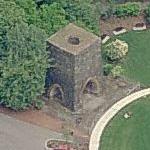 By kjfitz @ 2006-11-14 10:27:51
@ 45.410832, -122.660763
Lake Oswego, Oregon (OR), US
In 1865, prompted by the earlier discovery of iron ore in the Tualatin Valley, the Oregon Iron Company was incorporated. Within two years the first blast furnace on the west coast was built, patterned after the arched furnaces common in northwestern Connecticut. Other companies such as the Oswego Iron Company and Oregon Iron and Steel Company (OI&S) followed, collectively intent on making Oswego into the Pittsburgh of the West.
Links: www.ci.oswego.or.us
1,271 views