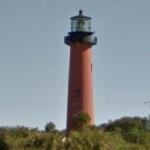 During the Civil War, Confederate sympathizers stole parts from the lighthouse darkening the light to allow blockade runners safe passage. In 1866 the parts were found and the Jupiter Lighthouse was relit. In 1899 a Weather Bureau Station and signal station were established.

During WWII, the lighthouse was became "Station J". The secret installation was used by the US Navy to intercept German U-Boat radio transmissions as they attempted to sink allied ships.
Links: www.jupiterlighthouse.org, en.wikipedia.org
458 views