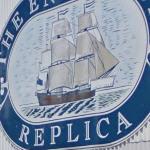 The Endeavour replica was launched at the end of 1993, and completed in 1994. After sea trials, the replica sailed from Fremantle to Sydney, where she arrived at the end of 1994. During 1995, the ship recreated Cook's voyage along eastern Australia, then visited New Zealand at the end of the year. In late 1996, the Endeavour replica set out on a circumnavigation of the world, visiting ports in South Africa, the United Kingdom, and North America, before returning to New Zealand in late 1999. The vessel returned to Sydney in mid-2000. In 2001, the replica was used for filming of the BBC documentary The Ship, then sailed to England in 2002. She spent the next two years visiting ports in the United Kingdom and Europe, before sailing back to Sydney in 2005, completing a second round-the-world voyage. On arrival in Australia, the HM Bark Endeavour Foundation transferred ownership of the vessel to the Australian National Maritime Museum.

In 2011, the replica began a year-long circumnavigation of Australia.
Links: en.wikipedia.org
645 views