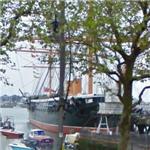 When completed in October 1861, Warrior was by far the largest, fastest, most heavily-armed and most heavily-armored warship the world had ever seen. She was almost twice the size of La Gloire and thoroughly outclassed the French ship in speed, armor, and gunnery.

Warrior did not introduce any radical new technology, but for the first time combined steam engines, rifled breech-loading guns, iron construction, iron armor, and propeller drive all in one ship, and built to unprecedented scale.

Her construction started intense competition between guns and armour that lasted until air power made battleships obsolete in the Second World War. This race caused her to quickly become obsolete, and she was withdrawn as a fighting unit in May 1883. Listed as part of the National Historic Fleet, Core Collection, she is now a museum ship in Portsmouth, United Kingdom.
Links: en.wikipedia.org
623 views