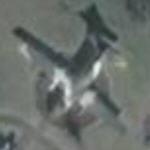 The Provider borrowed its basic design from a cargo glider, though the design was always intended to be eventually powered. The C-123K conversion added two jet engine pods under the wings. It has an aft cargo ramp through which the aircraft's cargo was loaded.

In 1962, the U.S. Air Force began Operation Ranch Hand, in which the Agent Orange defoliant was used. Its purpose was to expose the trails used by the Viet Cong to supply their troops in the jungle. One of these Providers crashed in February 1962. Its crew of three were killed, becoming the first U.S. Air Force members to lose their lives in the conflict.

The aircraft on display at Castle Air Museum started its life as a C-123B version which entered service in November 1956. In 1967, it was modified to a C-123K version. During its life, it served with the Tactical Air Command, the Air Defense Command, and the Air Force Logistics Command. In 1972, it was transferred to the U.S. Air Force Reserve until its retirement in 1980.
Links: www.elite.net
1,465 views