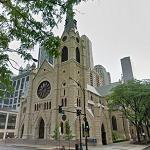 By kkeps @ 2008-10-31 20:06:56
@ 41.895658, -87.628333
Chicago, Illinois (IL), US
Holy Name Cathedral represents the integration of Gothic design with the message of the modern Church to the People’s of God. Each element tells a story of salvation; together, they make a powerful statement about the relationship of God and the People. Some features of the Cathedral illustrate the Church’s relationship to the surrounding community. The vaulted ceiling, restored in the 1968 renovation now features the coat of arms of John Cardinal Cody, Archbishop of Chicago, during the renovation. Surrounding the coat of arms are smaller seals, the official seals of the City of Chicago, the State of Illinois and the United States and the Papal See. They look down on a church building that is 233 feet long, 126 feet wide and can seat 1,520 people. The ceiling is 70 feet high; the Cathedral spire reaches 210 feet into the sky.
Brooklyn Architect Patrick Charles Keely begins design work on the new Holy Name Cathedral in 1874. (Keely is credited with designing some 600 U.S. churches, including 16 cathedrals, in the latter part of the 19th century as the U.S. Catholic population grew and dioceses multiplied.) The cornerstone is laid on July 19.
Links: www.waymarking.com, virtualglobetrotting.com
677 views