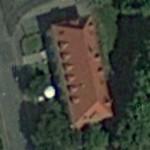 Iven though the intelligence bureaus of the German Federal States had them in their observation list they did nothing.

Early November 2011 the female suspect plew up the their home in house.
Links: www.zeit.de
587 views