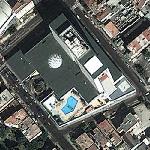 The hotel was built as the Habana Hilton, under the personal auspices of President Fulgencio Batista, as an investment by the pension plan of the Cuban Catering Workers' Union, and was operated by the American Hilton Hotels group. It was designed by the Los Angeles firm Welton Becket & Associates, who had previously built the Beverly Hilton, as well as the Capitol Records Building in Hollywood.

In 1996 the Spanish Sol Meliá chain assumed management of the hotel. It was placed in their Tryp division of urban hotels and renamed Hotel Tryp Habana Libre. It was renovated between 1996 and 1997. Among the highlights of the work was the restoration of an enormous original mural by artist Amelia Peláez over the main entrance which had spent decades hidden from public view.
Links: en.wikipedia.org
467 views