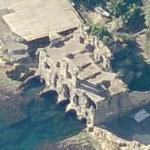 By Effi @ 2008-04-21 02:35:32
@ 40.794531, 14.190808
Naples, Italy (IT)
It was constructed in the century a.C and was one of the dependencies of the villa of the roman nobleman Publio Vedio Pollione (said hour Villa of Pollione or Imperial Villa of Pausilypon) and to its dead women, happened in the 15 a.C., the villa, thanks to its position a lot ambita (to half on the sea, and panoramic with sight on the part remaining of Naples, Sorrentina Peninsula, Vesuvio and Capri) become therefore imperial residence of Augusto, and all its successory ones.

The last one to inhabit it was Adrian.
Links: fc.retecivica.milano.it
1,015 views