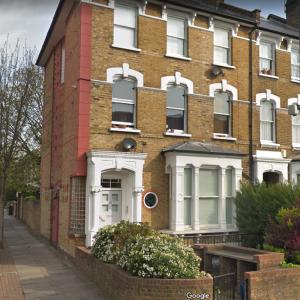 By BillHicks @ 2020-04-29 21:19:45
@ 51.5586273, -0.0674767
London, United Kingdom (GB)
The Krays and their associates lured Jack 'The Hat' McVitie into a basement flat inside this East London Victorian semi. A 'party' was the ruse to lure the naive McVitie into a room, where a small group of underworld accomplices and the twins were waiting. Once inside he was punched by Ronnie Kray. Ronny had a shot glass in his hand and it smashed, opening up a gash across Jack's face. Perhaps symoblic of Jack's habit of drinking too much and talking too much.

Then (according to the courts) Reggie began frantically stabbing the stunned McVitie, who in a forlorn attempt to escape crashed through a small window. Upon making sure McVitie was dead the Krays left, curtly instructing their associates to 'deal' with the body. There were reasons the hit was carried out, but generally it was seen as something that could and should have been avoided. Jack's rather botched killing led to the Kray's downfall as there had been many witnesses.
Links: en.wikipedia.org
6,509 views

BillHicks
@ 2020-04-29 21:32:22
Jack the Hat was actually not a bad guy really. He was known for being sure of himself socially, popular with the ladies. However his big mouth and love of booze was to prove his downfall. He would often give away facts aloud that in the underworld you are not supposed to. That effect was multiplied when he had a glass of whisky in his hand. He had pleaded with the Krays once he realised they wanted to kill him. stating he would move out of the area and never come back. By that stage though reggie had already started stabbing him. I may be wrong, but from memory this was Reggie's first murder and he was actually nervous so probably had a lot of adrenalin going and would not be able to absorb speech. It was a ruthlessness that began the twins downfall. Their increasingly violent methods and Ronnies increasing insanity along with a lot of other factors saw them imprisoned for life. Ron died in jail. Reg was let out a few months before death on compassionate grounds. These were proper sentences when life meant life!

BillHicks
@ 2020-04-29 21:35:53
Oh also forgot to say, the reason the Krays left and let their associates deal with the corpse was because they were both covered in blood. Reggie was drenched in it as he was the one shoving the blade in and out.