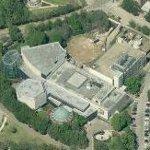 The current facility in Hermann Park was constructed in 1969. In 1988, the Challenger Center was opened in memory of the space mission; the simulator's aim is to teach visitors about space flight. The Wortham IMAX Theater and the George Observatory (offsite) were opened in 1989. The museum's high attendance levels have allowed the museum to begin plans to expand and more than double its floor space in the next few years. The new exhibits are most likely to focus on dinosaurs and astronomy.[2]

Also new for the museum are the openings of satellite locations. In March 2007, HMNS opened the HMNS Woodlands X-ploration Station, located in the Woodlands Mall. The facility is home to an interactive Dig Pit, where children can excavate a triceratops, a variety of living exhibits, dinos, and minerals [- the Woodlands location has permanently closed].[3]

HMNS celebrated its 100th year in 2009. During the year, they offered a multitude of family programs, lectures, free events, and kids' classes as part of the Fun Hundred Celebration.[4]