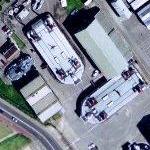 By kjfitz @ 2006-01-27 12:31:30
@ 50.808103, -1.209899
Lee on the Solent, United Kingdom (GB)
In 1986 a group of hovercraft enthusiasts decided that a number of early hovercraft designs were coming up for disposal and if the idea of a hovercraft museum was to reach fruition, they would have to be saved from being scrapped. Currently the bulk of the collection is stored in Hangar Building 40 at the former HMS Daedalus, though some important items are still housed in a 5,000 sq.ft agricultural building at Portchester, with double doors and access to the top of Portsmouth Harbour. The previous storage site was an old fort at Eastney, owned by English Heritage, and this was vacated in December 1992. It is hoped that the whole collection may one day be displayed under one roof, and with this in mind, an independent assessment of the collection is currently being undertaken with a view to securing a National Lottery grant.

The museum has a number of craft in its care including SR.N4 Mk II (002) Swift and ex Royal Navy BH.7 Mk 2 at the former HMS Daedalus, Lee-on-Solent. SR.N6 Mk 1S (009) Sea Hawk and the SR.N5 along with a number of smaller craft are stored at Portchester. The following are some examples of some of the craft in the museum's care: two working Hover Hawks, AV Tiger 12, HD.2, Marine Swift (similar to a Crossbow), Britten Norman CC.7 as well as the SR.N4, SR.N5, SR.N6 and BH.7. The museum also has an SR.N6 Mk 5 (well deck variant) build number 003 stored at Fishbourne on the Isle of Wight. Other craft in the collection include a Hovermidget, Clarkushion, Hoverscout, Hoverlark, Skima 4s, GP Too and a Skima 12 which was purchased for the Museum by Mike Pinder from the Sultan of Oman. The museum is in possession of numerous manufacturer's concept models, as well as models of actual full size craft. Some special items housed at the Museum, are the Sir Christopher Cockerell coffee tin experiment, one of the first radio controlled models to prove the hovercraft concept, and the large 1:6 scale SR.N1 model built to demonstrate the craft before the full sized item was built; now fully restored with a Carnegie grant.
Links: www.hovercraft-museum.org
1,756 views