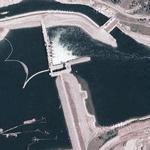 The reservoirs behind the dam is named Arrow Lakes extending 232 km (145 miles) north to Revelstoke Dam, and contain 8.76 km3 (7.1 Maf) of reservoir volume. The dam is operated by BC Hydro.

The dam, originally named the Arrow Dam, was built in 1968 as part of fulfilling Canada's role in the Columbia River Treaty, and was intended only to control the flow of water in the Columbia River for downstream dams, but in 2002 a 185 megawatt (MW) powerhouse was added.
Links: www.virtualmuseum.ca
576 views