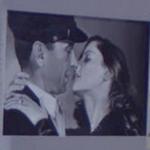 Lauren Bacall (born September 16, 1924) is an American film and stage actress and model, known for her distinctive husky voice and sultry looks.