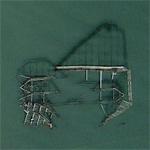 One of the most unusual scenes in the aftermath of the storm is this roller coaster, which fell from the Casino Pier amusement park and sits in the Atlantic Ocean. The city's mayor believes leaving the roller coaster where it currently stands would make "a great tourist attraction".
Links: en.wikipedia.org
1,700 views