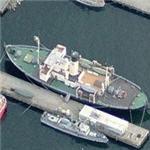 She was launched in 1915 as the Isbrytaren II, and was a conventionally constructed Baltic icebreaker, with a strengthened bow shaped to be lifted up onto the ice to crush it and a forward facing screw to push water and crushed ice along the side of the hull. She also has heeling tanks which can be filled and emptied with seawater in turn to rock the ship to widen the channel. Her reciprocating steam engines are the most powerful functioning ones in Sweden.

Although she was the country's first large icebreaker, she was owned by the city of Stockholm and used to keep the channels around it clear of ice. She was also sometimes used outside of the Stockholm area by the Swedish government since they had contributed towards her cost.

She was renamed in 1958 during an extensive refit, which saw her converted from coal to oil, the bridge was enclosed to protect the deck crew from the weather, and radar and radio fitted.
Links: en.wikipedia.org
1,047 views