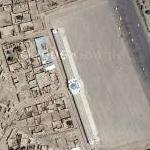 By kkeps @ 2010-02-15 14:27:34
@ 34.517917, 69.190779
Kabul, Afghanistan (AF)
Id Gah Mosque or Eid Gah Mosque is the second largest mosque in Kabul, the capital of Afghanistan, where 2 million people offer Eid prayers twice a year. Id Gah Mosque was commissioned by Babur the ruler of the Mughal empire before being renovated on a large scale by King Abdur Rahman Khan in 1893 or before. It is said that Babur used stones imported from india to build the mosque, building huge mosques where used as propaganda during mughal rule. Another story relates Jahangir was the original builder of this mosque. Located in the Shar-e_barq of Kabul, which is under development, the mosque is located in the wealthiest part of the capital. It is also an unofficial political center because of its large influence on governmental decisions.
Links: en.wikipedia.org
961 views