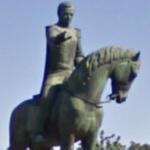 Shortly after his famous victory, Zaragoza contracted typhoid fever, of which he died at the age of thirty-three.
Links: en.wikipedia.org
673 views