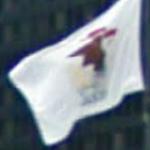 By kkeps @ 2011-10-16 11:19:15
@ 41.889523, -87.621616
Chicago, Illinois (IL), US
The current flag depicts the Great Seal of Illinois, which was originally designed in 1819 and emulated the Great Seal of the United States. In the eagle's beak there is a banner with the state motto, "State Sovereignty, National Union." The dates on the seal, 1818 and 1868 represent the year Illinois became a state and the year in which the Great Seal was redesigned by Sharon Tyndale. Although "State Sovereignty" comes first in the motto, Illinois was victorious in the American Civil War on the Union side, fighting against state sovereignty, so Tyndale placed "State" at the bottom and "Sovereignty" upside-down.
Links: en.wikipedia.org
478 views