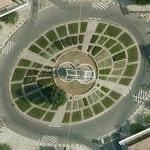 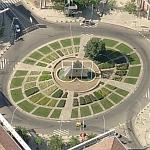 By tuttleberry @ 2010-11-02 16:48:33
@ 43.63941974, 1.37730782
Blagnac, France (FR)
Located in a suburb of Toulouse, France, the “Place de la Révolution” is probably one of the most blatant displays of Illuminati designs in existence: a huge pyramid hovering atop a map of the world. The symbolic meaning of this structure reveals a rather grim and elitist ideology and seems to confirm the conspiracy theorist’s claims: the world is lead by a secret cabal named the Illuminati.

The Place de la Révolution was built in 1989 to commemorate the bicentennial anniversary of the French Revolution.
Links: theilluminatiwatch.com
4,171 views