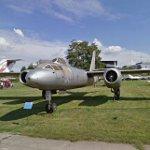 
The Ilyushin Il-28 (NATO reporting name: Beagle) is a jet bomber aircraft of the immediate postwar period that was originally manufactured for the Soviet Air Force. It was the USSR's first such aircraft to enter large-scale production. It was also licence-built in China as the Harbin H-5. Total production in the USSR was 6,316 aircraft, and over 319 H-5s were built. Only 187 examples of the HJ-5 training variant were manufactured. In the 1990s hundreds remained in service with various air forces over 60 years after the Il-28 first appeared.
Links: en.wikipedia.org
317 views