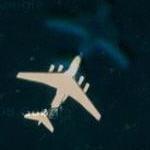 By kjfitz @ 2008-07-17 10:16:39
@ 25.391514, 55.300294
Dubai, United Arab Emirates (AE)
The Ilyushin Il-76 (NATO reporting name: Candid) is a 4-engined strategic airlifter designed in the Soviet Union and in widespread use in Europe, Asia and Africa. Originally built for the military, the plane has subsequently seen extensive service as a commercial freighter, especially for the delivery of outsized or very heavy cargo. A water-carrying version of the plane has proven effective in fire-fighting operations in many countries. The Il-76 reportedly carries some 90% of ramp-delivered European airfreight and 90% of disaster relief aid worldwide. It is the most widely used dedicated jet freighter in the 40+ t. category.
Links: en.wikipedia.org
646 views