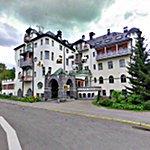 By Hinkkanen @ 2012-10-18 13:50:16
@ 61.168994, 28.770246
Imatra, Finland (FI)
Imatra State Hotel (Imatran valtionhotelli) is an art nouveau hotel resembling a medieval knight's castle by the Imatrankoski rapids. The original name of the hotel was Grand Hotel Cascade d'Imatra. It was designed by architect Usko Nyström and finished in 1903 and the original intention was to attract customers from the Russian nobility. During the WWII it was used by the military and was restored to original condition 1985-87. It's currently part of Rantasipi hotel chain.
Links: www.rantasipi.fi
479 views