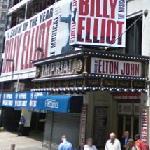 The Shubert Organization's fiftieth venue in New York City, it was constructed to replace their outdated Lyric Theatre. Designed by architect Herbert J. Krapp specifically to accommodate musical theatre productions, it opened on December 25, 1923 with the Oscar Hammerstein II-Vincent Youmans production Mary Jane McKane. Since then, it has hosted numerous important musicals, including Annie Get Your Gun (1946), Fiddler on the Roof (1964), Dreamgirls (1981), The Mystery of Edwin Drood (1985) and Les Miserables (1990), which played at the theatre until 2003.