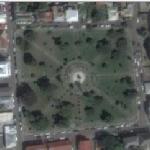 By Mike1989 @ 2014-04-12 00:23:48
@ 17.296101, -62.722119
Basseterre, Saint Kitts and Nevis (KN)
Independence Square was named on the occasion of St. Kitts and Nevis achieving political independence on September 19, 1983. Originally called Pall Mall Square, The Government first acquired it in 1750 and it rapidly became the administrative, commercial and social centre of Basseterre. The Square was the site of the slave market. Slaves arriving from Africa were temporarily quartered in the basement of a building on the south side of the Square.
Links: en.wikipedia.org
497 views